In AIM FOR LOVE, author Pamela Aares continues The Tavonesi Series. Get ready for All-Star alpha males and the strong women they come to love! When love’s the game, you can’t play it safe…

A role in an indie movie has turned heiress Sabrina Tavonesi into an overnight Hollywood sensation. She should be thrilled, but the troubled woman she played in the film has come alive in her dreams, turning Sabrina’s life into a nightmare. Assaulted and injured at the film’s premiere, she has only has three weeks to rehab her shoulder – and overcome her secret nightmares – before shooting the sequel.

When her All-Star brother insists that his teammate, pitching phenom Kaz Tokugawa, can get her ready in time, Sabrina is desperate enough to try anything…even some mysterious samurai practice. As the handsome young pitcher charms Sabrina with his amazing skills, he heals more than her shoulder–he begins to make her believe in love.

Kaz can’t afford any distractions. He’s fighting to save his family’s failing peach farm and secure a contract with the Major League team of his dreams. Falling for his teammate’s sister isn’t part of his plan. But even his focused samurai training can’t keep the troubled beauty from stealing into his heart.

When Kaz is accused of murdering a drug lord threatening his family, Sabrina is his only alibi…or is she? Can they learn to trust one another before their secrets destroy their lives as well as their love?

I have had the wonderful opportunity to read and review every book in this series so of course I immediately signed up for this one as soon as I received the invite. All of the characters are strong people that are dealing with personal problems but the men are all baseball players. I’ve loved every couple and this was no exception. I’ve been looking forward Sabrina’s story and it was an awesome one. I love how these books have baseball in common yet they don’t dominate the story.
Kaz and Sabrina have an instant attraction to each other but both are determined to stay away from it at first. Kaz is helping Sabrina heal from a shoulder injury but it’s so much more than that. He’s a sixteenth generation samurai so he has a really interesting way of looking at things. His reserve is the opposite of Sabrina’s vibrancy in many ways yet they work well together. Their personalities compliment each other in many ways and I loved reading about them.
I loved the story line in this book. There are so many layer to the plot line so even when one issue is resolved (even if only temporarily) another one is being dealt with. As a result, I was constantly itching to keep reading so I could get the next part of the story. Everything flowed really well and not only were the characters great but it was nice to get glimpses of previous books’ characters. This truly is a fantastic book in a wonderful series that will keep you interested from page one. 5 out of 5 palm trees!

Kaz put his hands on her shoulders. Sabrina shut her eyes and hoped he didn’t feel the zing of adrenaline that shot through her when his fingers touched her skin. And was grateful that he couldn’t see the blush of embarrassment that flushed her cheeks. Goose bumps lifted along her arms as something more, some feeling she had no word for, rushed into her.

“Are you cold, Sabrina?”

“No,” was all she could utter.

She really was losing her mind. The guy hadn’t had his hands on her for more than thirty seconds and already he’d shocked feelings through her that made no sense. She’d been touched by muscled, athletic stuntmen during film shoots, by lovers over the years, by Derrick—who’d be her lover if she let him—but no man’s touch had created such a deep, immediate and mysterious effect.

He ran his fingertips along her shoulders. She tried to suppress the rising shiver.

“Your back, your spine, your glutes, those are your power sources.” He pressed along her muscles, his fingers streaming unsettling energy as he moved closer to the nape of her neck. “Along with your core. But we’ll address your abdominal muscles when we go back inside.”

The image of him observing her belly sent another shock of heat into her core. And lower. That sensation she did have words for—desire, hot and insistent. She wondered if he knew.

He pressed under the blade of her injured shoulder and the pain made her wince, had her tensing, guarding.

“See if you can breathe into this, Sabrina. I promise not to hurt you.”

She inhaled as he pressed his fingers gently into the knotted muscles under her shoulder blade. Then he pressed on both sides of her shoulders at a point where the sensation was nearly unbearable, even though his touch was light. The near-painful feeling kept her mind off the twinge of hot wanting she was trying to ignore.

Maybe it’d just been too long since she’d had a lover. Maybe she should share Derrick’s bed. But something had kept her from crossing that line with him. He might be her co-star, mentor of sorts, and friend, but she wasn’t as ready as he was to add lover to the list.

Kaz traced his fingers down her arms, stroked along her forearms to her fingertips.

She shivered with a mixture of pleasure and wariness. Mostly wariness.

Pamela Aares is an award-winning, internationally bestselling author of contemporary and historical romance novels and also writes about fictional romance in sports with her new Tavonesi Series. Get ready for Alpha male All-Stars and the strong women they come to love!

Her popularity as a romance writer continues to grow with each new book release, so much so, that the Bay area author has drawn comparisons by readers and reviewers to Nora Roberts.

Pamela Aares writes romance books that she loves reading, particularly those that entertain, transport and inspire dreams while captivating and tugging at the heart. She takes her readers on a journey with complex characters in both contemporary and historical settings who are thrown in situations that tempt love, adventure and self-discovery.

Before becoming a romance author, Aares wrote and produced award-winning films including Your Water, Your Life, featuring actress Susan Sarandon and NPR series New Voices, The Powers of the Universe and The Earth’s Imagination. She holds a Master’s degree from Harvard and currently resides in the wine country of Northern California with her husband, a former MLB All-Star and two curious cats.

If not behind her computer, you can probably find her reading a romance novel, hiking the beach or savoring life with friends. You can visit Pamela on the web at http://www.PamelaAares.com

While each book in the Tavonesi Series can be read as a standalone, you may enjoy the other book in the series! The first five books are available and include: 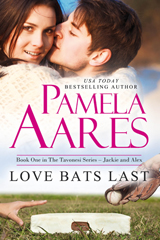 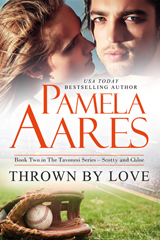 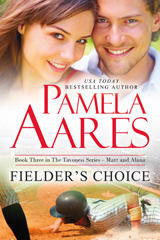 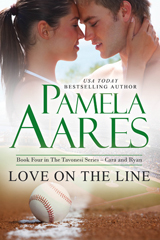 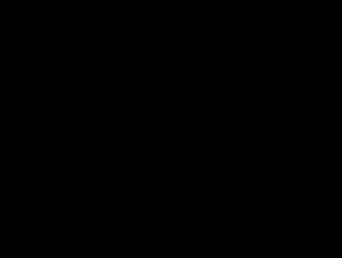